Online learning Serbian as a heritage language in 2020

“Online learning Serbian as a heritage language” has been successfully realized for students from the diaspora and the region.

The Academic Serbian Association has successfully organized the project “Online learning Serbian as a heritage language” for students from the diaspora and the region. Accredited teachers of ASA taught the course to participants from all over the world. The project was realized under the auspices of the Ministry of Culture and Information.

The project lasted from June 15th to December 31th, and the online course itself lasted from August 10th to October 31st, 2020. 22 students participated in the project. The countries from which our students come are Albania, Germany, the United States, Norway, Canada, Northern Macedonia, Ireland, and Italy. 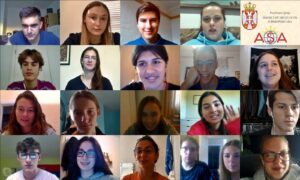 The lessons lasted 12 weeks and were held twice a week for 45 minutes, according to the agreement between the teachers and the students. The total number of lessons held per student is 24. Each lesson was adjusted to the wishes and interests of the students. After half of the classes, workshops were held where our students got acquainted with our culture, tradition, and history.

As part of the drama workshop, students read the work Kapetan Džon Piplfoks. At the literary workshop, they read excerpts from the novel Hajduci, Dnevnik o Čarnojeviću, and many others, but also learned the verses of our most famous writers.

At the film workshop, we talked about the films of Serbian cinematography, and together they watched the film Lajanje na zvezde.

Students who had a higher level of knowledge of the Serbian watched the film Zona Zamfirova and after the film they discussed the differences between the Serbian literary and folk language. Within the folklore workshop, the students got acquainted with folk dances from all over Serbia, as well as with folk costumes.

At the scientific workshop, the students were introduced to our scientists, such as Nikola Tesla, Mihajlo Pupin, Mihalo Petrović Alas, Milutin Milanković, etc.

The workshop on old crafts

The workshop on old crafts included live inclusion of lecturers from the association Višnja from Niš. They were introduced to old crafts and saw the making of objects from different materials. The teachers introduced the students to the old craft through recordings and video calls, and they talked about it in the following classes. 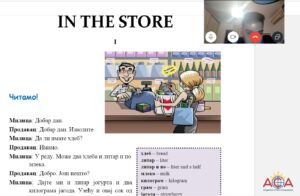 During this course, students had the opportunity to get to know each other, make friends, exchange experiences, get to know different cultures. This year, as part of the ASA project, it equipped her office with one computer, so the teachers kept most of the lessons from the ASA office and used its equipment.

After completing the online course, students filled out questionnaires about impressions.

It is important to point out that this was the third realization of the Serbian language course organized by the Academic Serbian Association for the descendants of Serbian emigrants, and that there is great interest in it in the world.

You can find more about the project in the brochure: Брошура – пројекат 2020.